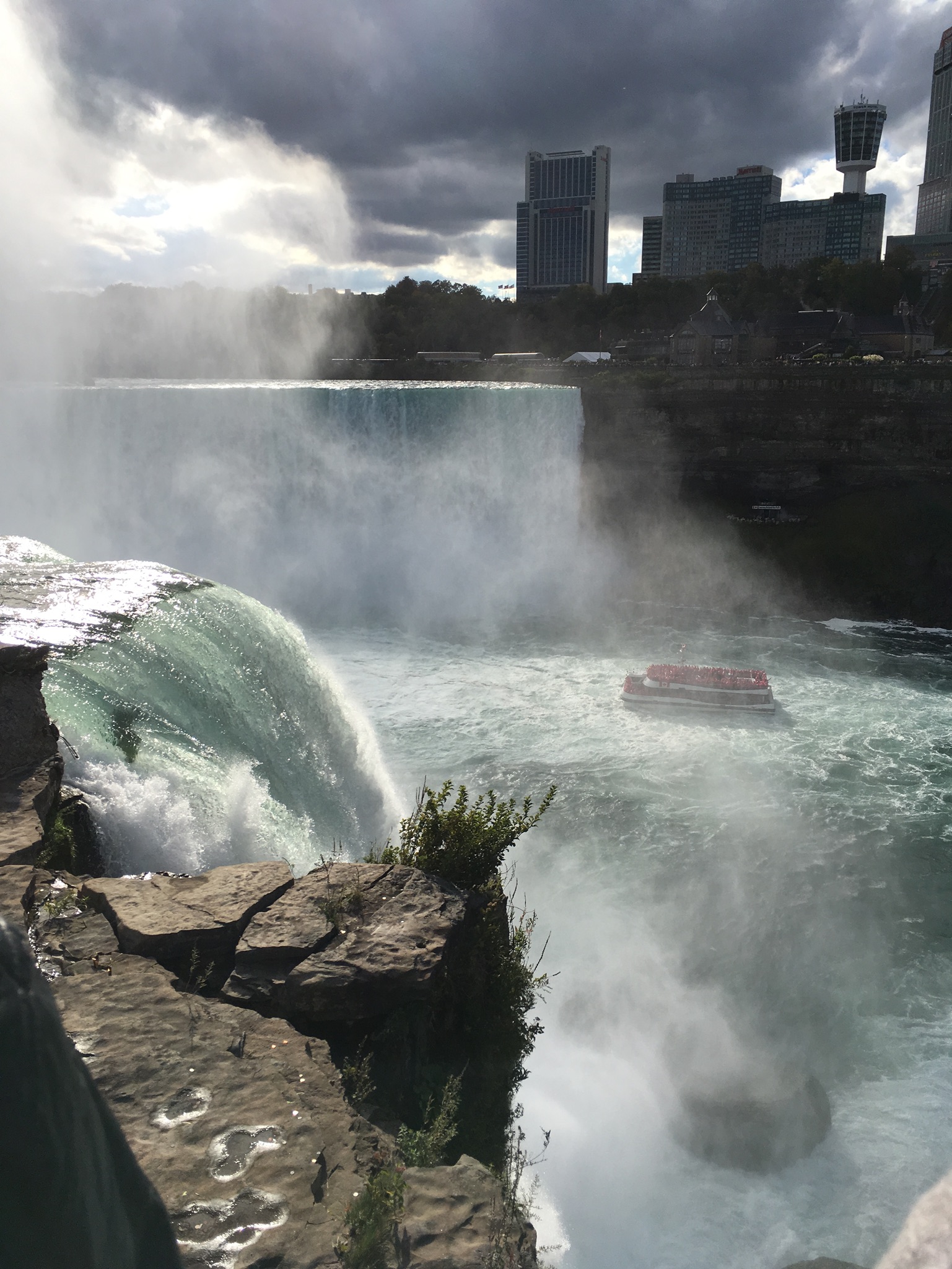 Our local T-shirt shops are fond of reminding us what Tennessee Williams once said,

“America has only three cities:  New York, San Francisco and New Orleans.  Everything else is Cleveland.”

And I forget to appreciate how true this is until I leave, excited to visit something new.  Maybe one of our nation’s great wonders… like Niagara Falls!

So I tagged along with my husband, Bobby, on his last business meeting to do just that, and truly – the Falls are breath-taking.   Majestic.  Amazing.

We spent an afternoon with some of his coworkers, walking around the park, breathing the mist, bending and stretching to get just the perfect camera shot of this display of nature’s splendor.  I may have captured the view, but can’t describe the sense of timelessness conveyed by the roar of cascading water and foam…

And I felt, as Chevy Chase once did, that I had now seen this great wonder…  Check.   (Wasn’t on my bucket list, so nothing to cross off), and “Let’s Go!”

Not so fast.   We had three more days to kill, two of which he was spending in a conference, and I planned to spend in the park reading and doing nada.   But we had a day to see Buffalo – home of the Bills, and why not check it out?

I’ll tell you why… there is nothing much to see.   Worse, there is no personality to be had, no people-watching worthy of our sharp observatory skills, and oh.my.god… WAY too many rules.

I didn’t even get pictures of the “Sidewalk ends here,” (which it didn’t), followed by “Do not stand on sidewalk,” then behind that, “Do not stand on grass.”   So… just hover with your magical powers, I guess, because standing anywhere became illegal at one point, and what’s a tourist to do?

But the eeriest thing for me was the lack of absolutely anything local to investigate.  I tolerated the chain hotel and the Starbucks and the Applebees, assuming that our persistence would pay off and we’d find the inevitable very cool dive bar somewhere and watch the game, since it was Sunday.

Except there was no dive bar.

Do you hear me?  THERE WAS NO DIVE BAR, AND IT WAS SUNDAY.

So there we were.   Two New Orleanians searching for a soul.  Every city has a soul… doesn’t it?

We walked for two hours in town.  Chain eateries and sports bars were scarce, but they did exist.  Wherever we went we were offered chicken wings.  I guess I never put two-and-two together that Buffalo chicken wings were invented in… Buffalo.

But the benches beside the bus stops advertised medical plans.   The buses and “trolleys” had billboards on the sides that advertised hospitals.  It was SUNDAY, my friends, and there were TWO people in the hotel sports bar watching the Bills game – and they were playing at home.  Fans?  I didn’t see any.  Dunno.

It was just totally creepy that not even one local ambulance chaser had a billboard on the streets.   I didn’t know I could miss Morris Bart, but I was suddenly nostalgic and realized I know his phone number by heart.

And super-corporate aliens landed and kidnapped all the hipsters and prevented the opening of any dirty coffee shops or underground book stores, or ANYTHING other than what you’d find in a suburban (cough-Lakeside!) mall.

I think I know what purgatory looks like now.  It’s not awful, it’s not hellfire and brimstone… just a void of humanity and personality where you must spend eternity until enough people pray for your redemption… and you can be returned to New Orleans.