Pot Hole Humor… Only in NOLA

This is just a quickie – just one little ‘ole pothole among the thousands, but a great demonstration of the reality of our sinking streets.

Zoom in on the picture at the left… it’s corner of State Street and St. Charles Ave.

It was during Halloween, when the owners of the humorous home on that corner filled the yard with ironic skeletons and each skeleton had a “name tag.”

There was a skeleton in the grass, lying down with a sign pointing to it that said, “Grave Predicament.”

But it got funnier.   When the pothole on the corner grew bigger and bigger day by day, the city, in its infinite efficiency, stuck some orange cones around it… problem solved.

So the owners moved the “Grave Predicament” sign to point to the pothole, instead.

Needless to say, many pictures were snapped, many laughs were had by all – and suddenly, it became a priority repair… the pothole was filled before Thanksgiving – and we’ve been dodging it for over a year now. 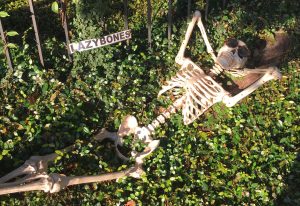